Spin Magazine published a beautifully illustrated story on Kraftwerk in 1998 pulling excepts from a seminal Lester Bangs book on the band with additional and fantastic timeline art. However as this was before the internet was a household fixture the article has fallen through the cracks and has gone unappreciated in the online world of the 20XX's. That's a shame as Florian Ribisch's excellent Kraftwerk illustration is a stunning work of art and deserves accolades. Depicting our beloved electro-boffins as gas station attendants perfectly reflects the aesthetics of any Kraftwerk album cover: the rectilinear building, a pastoral landscape, the ideal representation of a petrol station, the uniforms - all very teutonic and humorous as this is a band you'll never see pumping gas or being mundane.

I stumbled upon this illustration doing a Google Book search and realized that it doesn't appear anywhere else on the internet. While the scan of the article was good enough for reading, it left a lot to be desired for anyone curious about the finer details of the art and also the timeline of the band's history was grainy and lo-res. I wanted to make a large canvas of this image so I eBay'ed a copy of Spin's August '98 issue and scanned it. The one I got was in perfect condition, 18 years of existence had not yellowed the paper and it was without folds or creases. I cut the pages out with a razor and scanned them at 600dpi and used Microsoft ICE to paste the multiple scans of each page together as they were too large to fit on my scanner, then color corrected and fixed the imperfections from the printing process.

Here it is for your enjoyment. I'm posting the scans at the lower resolution of 2000 pixels tall but if anyone desires the TIFFs at a much higher resolution sufficient to reveal the offset dots from the gravure drop me a line or comment below. 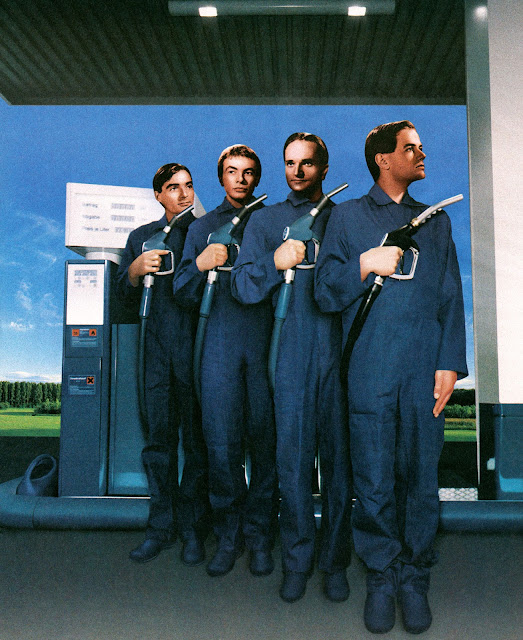 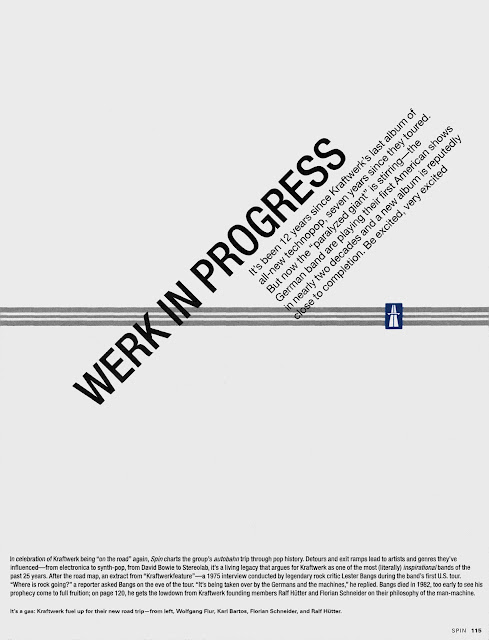 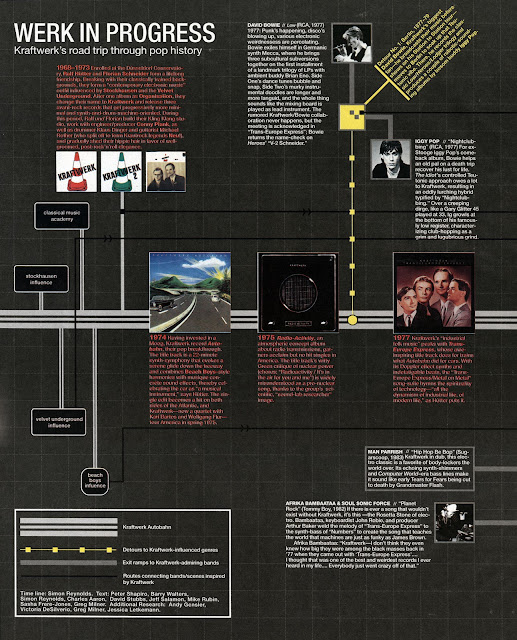 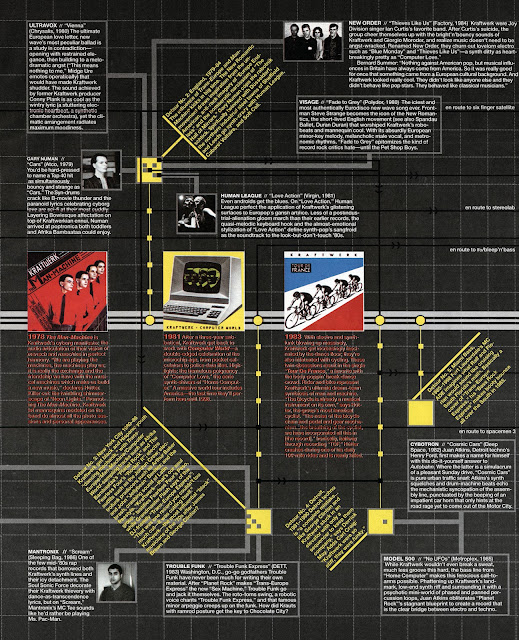 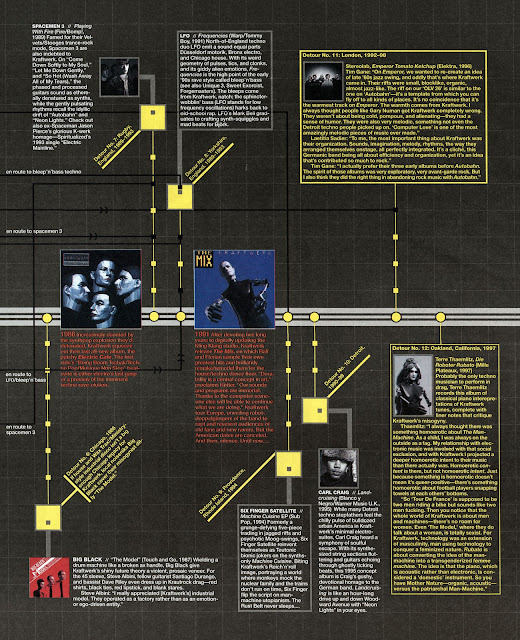 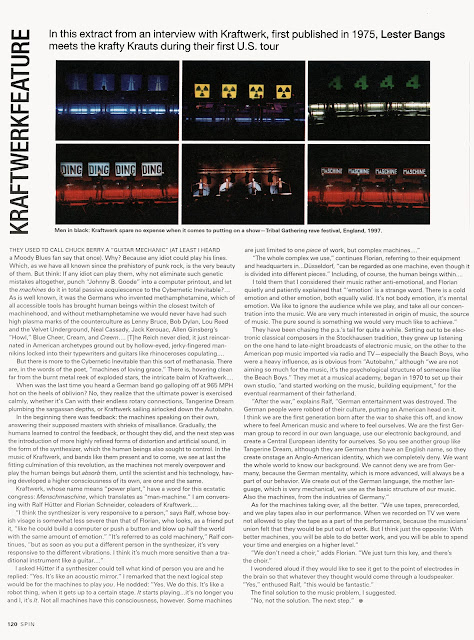 Choose one: a soul crushing morning at the DMV waiting to renew your driver’s license amid a sea of crying infants or a visit to the ham-fisted death dentist your insurance plan forced on you? Everyone rich or poor inevitably has to do these things, and unless you’re Charles Nelson Reilly there’s no preferential treatment.
As my fiancée Jennifer and I had just moved to Florida, we had to visit the grey bureaucrats at the DMV within 30 days or risk the ire of the state apparatus.

My better half went first. Ordinarily you get an embarrassing, scowling photo you’re legally obligated to carry for the next decade like a tiny Scarlet Letter. I challenged her to make the most of it as others have done. After some cosplay preparation, she went as her polar opposite: a platinum blonde, ’50s-era starlet in a cocktail dress with ruby-red lipstick. She nailed it. Nobody who’s seen her remarkable license fails to comment. This also meant she’d thrown down the gauntlet and it was my turn; I had to bring my A game. Little did I know I was about to be a Florida Man meme.

Who doesn’t love a good Florida Man meme? Endless prose has been written in honor of his creative stupidity a magnitude beyond the ‘hold my beer and watch this’ standard. A quick check for recent examples yields “Florida Man Arrested for Uttering the Words ‘Erect Penis’ at School Board Meeting” and “Florida Man Caught Trying to Smuggle Dead Alligator in Car” shows it’s not a meme in decline. A recent Florida transplant myself, I laugh it off when frenemies rag me about it — but society has always needed a group to lightheartedly defame, with French surrender monkey and Polack jokes as good examples.

Despite this, it came as a complete surprise to see my face splashed across hallowed journalistic institutions under the headline “Florida Man Changes Name To Kraftwerk”. Reality set in while sitting with my morning cuppa joe, wiping sleep from my eyes while noting an absurd number of Faceballs Facebook notifications: I’d somehow become a Florida Man too.

Here’s a sampling: legendary British music journal New Musical Express. The EDM friendly MixMag. Orlando’s own Weekly. Canada’s Exclaim. Something in regards to Magnetism. The best beats are usually Electronic Beats. Stoney and His Beats. Our favorite city where women stand under red lights and beckon you into questionable situations, Amsterdam. Deutschland’s Shortnews …

I’ve been a Kraftwerk super-fan since childhood. In the 70s, they beamed down from planet Germany and served up an electronic music genre not heard before. Kraftwerk were perhaps the least German musical group ever (despite the Sprockets cliche of “und now ve dance”) and shunned at home by their lederhosen-attired German comrades with a strong bias for schlager, oompah tuba music and David Hasselhoff. Despite this, Kraftwerk arguably became more influential than The Beatles and were associated with driving on the Autobahn.

They’re also a legendarily secretive band, a musical Thomas Pynchon that never grants interviews, doesn’t sign autographs backstage, doesn’t let the world know they’re mortals who put their pants on one leg at a time. It’s maddening. They want us to think they’d been plucked from the wreckage of a UFO and I’m not buying it. I wanted the world to see their mundane side — and there’s no place on planet Earth more mundane than the DMV.

I hatched a plan.

The woman at the DMV was remarkably accommodating for my license photo, ensuring the red shirt and tie would fully appear. I’d jettisoned my beard that morning, a companion of the past few years that had to go. Jennifer applied masking tape around my face and shot black hair dye onto my salt and pepper hair, a bit of pale makeup base and a touch of rouge on the lips. I was a good facsimile of The Man-Machine. Only a few people at the DMV openly stared. I bid them auf wiedersehen.

Kraftwerk spent the rest of the day in Tampa being mundane and human, shopping at Microgroove Records, eating lunch, making an unpublished homage to Frank Zappa, driving a truck, gassing a Subaru and feeding ducks before a solid eight hours of rest. I scanned and edited the license to obscure or confuse all identifying information and replaced my own real name with “KRAFTWERK” and uploaded everything to Flickr. The general reaction from my friends (most of whom are happy to listen to the radio) was that I was a “dork.” I promptly forgot about it. But the internet never forgets and loves to remix. I should not have been surprised that agent provocateurs would run with the name change angle. For the record, I didn’t change my name. I’m still the same smooth jazz, Tampa-based David Sanborn I’ve always been.

I’ll pass the DMV soul-sucking challenge along to you: make your photos noteworthy, live a little. You’re going to be stuck with it for a long, long time. Faith No More can explain the moral (if any) to this story with their evergreen I Started a Joke.

Also, if you’re dumb enough to ride motorcycles, you should consider being an organ donor, too.

Legal Disclaimer: this story originally appeared on July 26, 2016 on the automotive industry site The Truth About Cars.

Posted by David Sanborn at 5:44 PM No comments: