Kraftwerk Sky-Dancer: She said "wouldn't it be funny if ..." and I said YES! 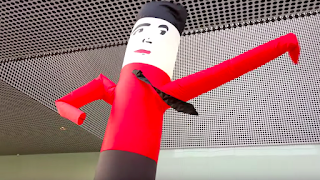 Sometimes an audacious idea pops into your head and you mull it over and then ... do it. For example, I jokingly suggested to my best friend and wife Jennifer that we should have a Kraftwerk themed wedding ... and without a pause she said SURE!  Point being: you should pursue the flashes of brilliance you're occasionally blessed with and also be the positive influence and enabler in someone else's life who needs that little push to make it happen. To wit, the creation Jennifer has crafted known as the Wild Wacky Wiggly Wolfgang.

Constructed of ripstop nylon bought from eBay and with a few back of a paper bag measurements of existing Sky Dancers, Jennifer plunged into this project without being sure if it would even work properly. Red, black and a kind of eggshell color were the settled upon choices, but not before ordering many color swatches and fabric samples so she would have a clue as the fabric's pliability, color suitability and hue.

Also initially purchased but found to be unsuitable were a 12 volt automotive radiator fan and high amperage 110v ac to 12v dc converter. This experiment was to hopefully make our Sky Dancer portable but in reality would only inflate our Wolfgang without the wiggle we desired.


On the other hand, it did inflate our Wild Wacky Wiggly Wolfgang for his inaugural moment in our back yard, late at night. To the chagrin of our very middling neighbors.

For reference, here's the Big Bear 3/4 hp blower we found locally for a fair price. Maybe this could be done cheaper but not without some expensive and failed experimentation.
For anyone wondering what our Kraftwerk Air Dancer looks like in real time and not projected backwards in time ...

Some fans collect autographs. We make artifacts and memories. This artifact is in honor of our friend Wolfgang and all our friends both in Kraftwerk (hello Fritz!) and the fans of Kraftwerk (hello John Shilcock, Paul Wilkinson, Thilo Schölpen, Rudiger Esch, Rob Keene & many more!).

Stay tuned for our Hazeltine 1500 computer terminal restoration (as seen on the cover of Computer World) and a review of Kraftwerk's discography on floppy disk.

There's a magic, shining moment in Fred Lane's jazzy "White Woman" that (lyrics aside) has put a demented smile on my face for three decades now. It's a moment so symbolic and such a poke to the eye of convention that it stands out like a billboard in a desert. Any fan of jazz understands the language: pick a key, choose a thematic melody and tempo then ... go.

Each instrument gets a moment to riff as the band members hand off solos through a combination of telepathy and subtle cues. Thus it is that one must sit through the horrifying cacophony of the saxophone solo in White Woman, ears ringing from its icepick stabs to sensibility when finally it's over and a tremulous and polite flute solo briefly bows in with promises to undo the harm - then the saxophone, defying every convention, barges back in and stomps the flute solo into the ground.


This moment is the penultimate summary of Rev. Fred Lane's oeuvre - taking everything you know and expect and turning it on its head. He's a demented Dean Martin exuberantly answering the question "what if Marcel Duchamp was from Alabama and played jazz" and then answering it with a backstory so opaque that further questioning is not possible. The Duchamp comparison isn't too far out of bounds either: The Rev. Fred Lane is the alias and absurd alter-ego of Tim Reed who was a member of the Raudelunas collective, a Dada inspired cabal of University of Alabama students who were willing to live for their art in the midst of a city dominated by football and greek fraternity culture.

Anyone who has ever studied the back cover of Car Radio Jerome has marveled at the astonishing musical catalog depicted there of Fred Lane recordings, albums with titles like "Abdul Ben Camel and the Anatolian Rave Ups", "Stand Up and be Counted Sherlton Welley", "Colonic Olfactory Cartel", "The Dog who Loved my Leg", "Fred Land Live at First Baptist Federal Prison", "The Hit" or any of the other thirty five depicted there know that it hinted at an unbelievably deep well of music, if only any of those LP's were to be found. Which they could not. Only two were released: 1983's "From the One that Cut You" and 1988's "Car Radio Jerome", both on Kramer's Shimmy Disc label. 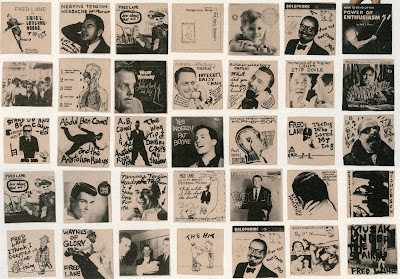 Thirty three of these albums are as real as the set of fictional encyclopedias from Jorge Borges' short story "Tlön, Uqbar, Orbis Tertius" - another beautiful speculative fiction of enormous proportions. And so it is that I unabashedly compare Fred Lane to titans of Dada and literature. I could go on at length about Fred Lane but my pals over at Dangerous Minds already wrote a short and illuminating piece on the man and his legacy so I'll leave it to you to check that out. For those unfamiliar with the music, give this a listen, and don't weep overly much for the flute solo cut down in its prime:

For those of us who have spent the last few decades wondering whether these albums might exist or about the man behind the madness, fear not as a film documentarian improbably named Skizz Cyzyk has already spent two of those decades asking these burning questions. His debut effort "Icepick to the Moon" has touched down after an astounding two decades of halting production. It's a sampling of the evolution of digital video from the pixellated potato days of the late 90's to the 4k resolutions today as the technology evolved during production, yet this mixture of video qualities is natural if quirky. Mr. Cyzyk admits he learned the art of documentary film making by osmosis as his vocation is traveling to facilitate film festivals and has viewed thousands of films and documentaries. A recent job that thankfully involved far less traveling allowed him the desk time to learn Adobe After Effects to create the lovely animations that are peppered throughout and begin the process of editing footage into something cohesive. It was worth the two decade wait: lost footage was unearthed from the mid 70's and people came out of obscurity to talk on the subject who'd otherwise have been omitted had Skizz been a more hurried auteur.

The University of Tampa screened the documentary in the Cass center's theater and promised a "special guest".  Initially we were concerned that no one would show up as it didn't seem to have been properly announced. Doors opened at 7:30 for an 8:30 showing and we sat alone in the dim listening to the banter of the three Radio-TV students who were sullenly assigned the task of operating the equipment. I felt sorry for them, having no idea as the significance of this documentary. It wasn't until well after eight that people began filtering in and before long all seats were occupied and I could breathe a sigh of relief. The fans looked like I expected: over 40, marching to the beat of a different drummer and proud to be a part of this. I was grateful to see a millennial couple behind us and upon introductions it was revealed that one is Tim Reed's nephew William - cool!

Peering further into the dimness behind us revealed a familiar figure at the back row. Our special guest was indeed special: band aids on his face, a dapper hat, chunky eyeglasses and white van dyke facial hair ... jackpot! There are times that warrant being a gushing, foolishly grinning fan-boy and this was one. I walked back and sat by him with a dumb smile plastered across my face and told him fan-boy stuff and he smiled back and was very gracious and appreciative to hear it. I told him about how he helped me embrace my southern heritage, that it was people like him and Flannery O'Connor, the Butthole Surfers, Wayne White, William S. Burroughs, The Residents or Truman Capote that could only have been forged in the crucible of the deep south to such great effect. I basically blathered, but I meant all of it from the bottom of my heart. Then I asked if he could sign the Icepick posters that the RTV department had thoughtfully given me, which he did.

Icepick to the Moon answered many questions for me, like what cauldron of the absurd could've cooked up a being as unlikely as Fred Lane and how did the very creepy song "From The One That Cut You" come about ... and why? That's a story best explained by the documentary, let's just say that it's based on something found in a derelict panel van ...

The Q & A after the movie was enlightening though the audience was shy about asking questions. I felt obligated to again chip in my two cents about the deep south being a crucible from which some amazingly offbeat talents have been forged. Here it is in its entirety:


I'd like to leave you with this: you too can own a piece of Tim Reed, so to speak. His focus lately has been on kinetic sculptures; things that whirl about in the wind and inspire whimsy, or as he puts it, "unusual kinetic sculptures for people who have nothing better to do with their money". I'm down with that. I must have a Booley in my yard STAT.

Addendum from the Rev. Fred Lane (Tim Reed) himself:


The stage show of FTOTCY was originally produced November 13,1976. The recordings Fun in the Fundus & Oatmeal are both from this production. Rubber Room was recorded in 1978 in anticipation of the Recommended Records sampler. This was delayed because of that label’s objection to the song’s content (literal minded maybe). They finally released I Talk to My Haircut (Why is this song’s subject matter less objectionable?)
Any how, the remainder of the tunes were recorded in 1981 at the Northport, AL chamber of commerce. We always used whatever space we could get away with.
The  record was at long last released on my fake label Say Day Bew records in 1983, seven years after it should have been and since I was young it seemed like forever.