Back in college I never ceased to be astonished at the crappy stereos my female friends owned: no-name garbage like Kraco, Soundesign, Yorx or whatever. Sometimes that was borne of economic factors but generally even the silver spoon crowd either had something lackluster or just a clock radio. I don't know why this divide existed between the genders and in retrospect it seems that having a high fidelity stereo is considered a "guy thing". Then there were the exceptions, the women who loved their music and wanted to hear it properly. They were a vanishingly small percent and very intriguing for me - and still are for that matter. A good example is Susi, a cherished friend whose home audio consists of a beautiful pair of matched Conrad Johnson components with some Magnepan SMGa speakers that stopped me in my tracks when I first spied them and are a point of pride for her.

Recently another dear friend lost some of her possessions for ... reasons ... and I felt compelled to step in and assist. Nikki is a collector of vinyl and has far more LPs than most of the guys I know who claim to collect but her turntable was awol. What she still had was her dad's very lovely vintage Marantz 2235B receiver that she'd had serviced and re-capped. This demanded a period correct player to replace the Marantz turntable that had been its mate. I had a vintage 1972 Pioneer PL50 that would make a nice companion to her 1975 receiver so I set to sprucing it up: I installed a new needle on the stock cartridge, replaced the belt, oiled the bearing and adjusted the speed. A bit of oil on the plinth and then a blob of rubbing compound with the buffer on the dust cover and it looked nearly mint.

But her speakers, oh my. Let's not mention them. Something had to be done. I trawled Craigslist and Facebutt Markethole and didn't see anything in the cheap and cheerful range. Then Nikki's pal Jonathan stepped in with his high school pair of Baby Advent II speakers which needed a bit of work. My pair of speakers for many years in college and afterwards were Advent Tower Prodigy and I had nothing but fond recollections of them. They punched well above their weight and made me happy for many years so their baby brothers were welcome. One of Jonathan's Advents appeared to have a burned out woofer, literally stuck at the bottom of its excursion and silent. I began looking for 6.5" replacements that had the same five ohm resistance, wattage and efficiency. My first foray was a no-name "5 Core" India manufactured woofer:

Here's the replacement on the right. Despite mostly matching the OEM unit in specs, its got a small magnet and a similarly weak bass response. It was really unimpressive compared to the working speaker, missing what I'd guess to be an entire octave of bass compared to the stock Advent woofer. Back to the drawing board and time for another speaker.
Seen on the left, a Pyle PDMW6. It's 8 ohm and a good efficiency rating with a conspicuously large magnet. The higher ohm rating should yield more sound per watt. In theory. In reality it sounded just as thin in the Advent box as the tiny 5-Core speaker. My theory is that both had very stiff surrounds that needed breaking in. Who knows? What I did know was that the engineers at Advent had magically synergistic woofers for their speakers and I needed another stock one before I'd be satisfied.
I reappraised the "burned out" Advent woofer: fully jammed at the bottom of its excursion, I'd nearly chucked it in the garbage. Closer scrutiny however revealed that the speaker cone didn't seem centered in the frame and the foam surround was distorted. I ohm'ed it and it measured normally. Jonathan told me someone had refoamed the cones in the past and I was suspicious that it was so off center that it got jammed. Maybe if I refoamed the cone? Not wanting to throw more time and money at it I bought literally the cheapest speaker surrounds anywhere: all the way from China, a pair for $3.
What I got was some of the most desirable woofer surrounds one could ask for: butyl rubber, chemically stable and tougher yet more pliable than any foam. Score!
Now it was time to remove the old surrounds, not easy as they were fresh, not the crumbly decaying ones I usually scrape off. The cardboard trim ring disintegrated and the foam surround only came off after 45 minutes of rubbing with acetone, carburetor cleaner and Q-tips. Then with all surfaces clean it was time to attach the new surround.
There's no end of discussion online as to the best glue for this job. Ideally you use a glue that takes a few minutes before setting firm so that any needed adjustments can be made. The glue should be for whatever best suits your needs: woofers can be paper or polypropylene or aluminum and so on and the surrounds can be either foam or butyl rubber.  I used rubber contact cement as it's the gold standard, but there's no room for screw ups. If things aren't centered, they're instantly adhered. A more forgiving glue is Aleene's Gel Glue, 8-Ounce, clear on Amazon but I didn't have any and was confident I could get it on the first try. There's two tricks to centering the woofer, the lazy route is to use a D-cell 1.5v battery and energize the coil so that it's centered, hopefully. The other is to carefully cut the dust cap off with an Xacto razor leaving a tiny bit connected and fold the cap back and put shims in between the voice coil and the magnet. I started with the battery but wasn't confident it would work so I used shims too. Some 3x5 cards were the needed thickness.
The cone does look a bit distressed after the acetone bath. In retrospect I could've colored it in with a big Sharpie? I used the battery to keep the cone fully retracted and I applied the shims. I then painted the contact cement on all surfaces and waited for it to dry tacky. I'd marked on the speaker basket exactly where the surround edge went and slowly applied it.
It's real easy to screw this up as any deviation will compound. Once the surround was on the basket I removed the battery and slid the cone back up towards the surround until the edges touched then helped them along with a light touch until all surfaces were fully adhered. I glued the dust cap back down with Uhu model glue and cut a new trim ring out of black foam core and glued it over the surround edge. Success: the woofer now made a full excursion from top to bottom without touching. 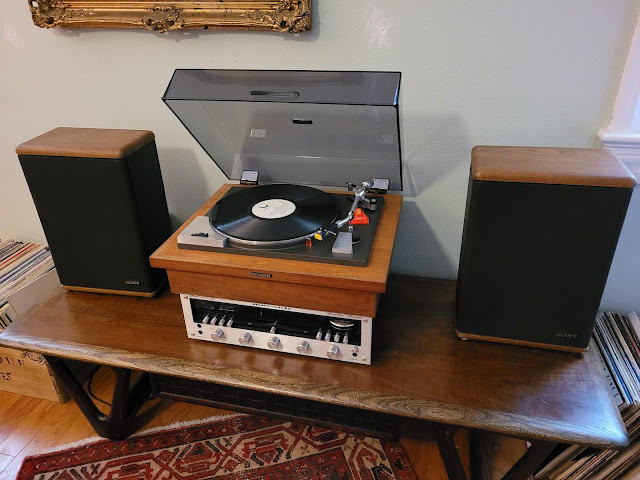 Voila: the finished setup! This is a temporary placement as there's no room anywhere else. Yes, the turntable is slightly impeding convective cooling from the amp and might pick up some hum - and yes the speakers shouldn't share a surface that acoustically interacts with the turntable but despite all this it sounds great. The walnut Advents look appropriate even if they are from a later decade and Nikki can get back to jamming to her Syd Barrett and Donna Summers records.
Thanks to Jonathan for donating the speakers and thanks to Nikki for being a cool friend. This system is a great example of a true entry level audiophile system and it looks sharp too. I'd be proud to own it. Mazel tov! 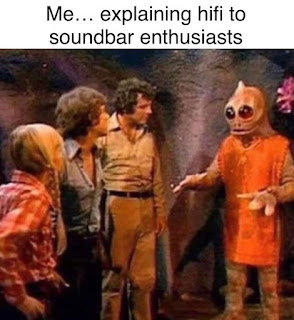 Posted by David Sanborn at 8:17 AM No comments: