Felix Laband - A Life In Collage 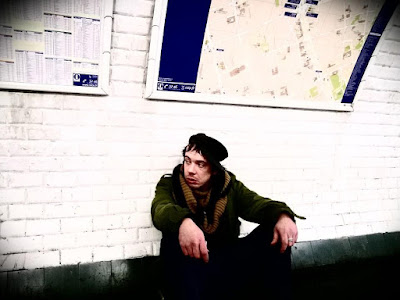 Trying to categorize Felix Laband's sublime music is fraught with peril.  It's a disservice to haphazardly pound the round peg of his art into a square hole called "electronic music"-  that would be lazy and devalue what he does, potentially equating him to any common aspirational DJ with a MacBook Air and Bandcamp, like calling Nick Drake a "singer-songwriter" or Augustus Pablo a "reggae artist". It's an inadequate appellation.

Then again, Electronic Music is a Lernaean Hydra, a mythical beast that sprouts two heads for every one that is cut off. The branches and categories spawn subcategories and endless fractal iterations that are maddeningly OCD. Imagine if you walked into End Of An Ear Records and saw that they'd subdivided their electronic music bin into genres: 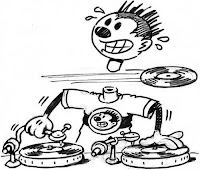 His music, typically devoid of vocals presents an escape route from the grinding banality of meaning. The passionate lyrics of wordsmiths like Stephin Merritt or Elbow can elevate the spirit - but there's much to be said for a reprieve from lyrics when the music itself is fantastic. It's why traveling in countries where we don't speak the language affords the opportunity to imagine that the conversations we hear or the background pop music is nuanced and thoughtful, or at least don't plague us with their vapid nothingness. It's an oasis where we forge our own meaning, and this is the space that exists within Felix's creations.

Hailing from Johannesburg South Africa, Felix hasn't exactly become a household name here in the States. His obscurity made legitimate purchases of his music difficult, so like any rabid fan I resorted in the early 00's to *cough*piracy*cough* and felt the pain of having shorted an artist that has contributed so much to our well being. But now more than a decade later thanks to Discogs, Ebay and Amazon it's easier than ever to patronize the artists we love. And so we did, with the largest music related purchase we've ever made.

Turns out Felix is a great collage artist. His Instagram feed has been a source of insight: shots of indigenous African tribesmen, moments of whimsy with his girlfriend Kerry, hanging out with dad, parties, EDM festivals and many intriguing cut-up collages. Collages that suggest a cultural heritage that's hard to parse, sometimes painful, often with a dark humor. The more one looks at his scissored and glued collages the more one can see the forces that cut, paste and bind his music together as if the art was an extension of the sounds.

We've admired the collages from afar and were smitten when we first saw "Reprisal" pop up in his Instagram feed. It elicited from us a palpable emotional response on par with Felix's music. There's a power to the poverty of the bleak, dark figure with the bucket, his head bisected by a broad kanji-esque brush stroke and a splatter of paint that could suggest bloodshed. We can infer that South Africa's brutal history of apartheid might factor into this tableau. It's a desperate scene that challenges us to derive meaning, to look for a ray of hope to break the code of the random letters peppered above and below. 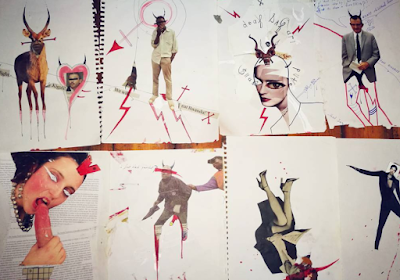 The image on Instagram was hashtagged by the Kalashnikovv Gallery and after a couple queries on email and Facebook we were able to ascertain that this piece was both on exhibition and was also (happily) for sale. It wasn't cheap, even the cost of the wire transfer alone was $50. We flipped a coin then did a best two out of three and decided to forge ahead with the purchase.

It took over a month, but the axiom about good things and waiting proved to be true: it arrived unharmed in a well crafted 2x4 and plywood bomb-proof box with a certificate of authenticity. The frame is a minimal and sturdy shadowbox with glass protecting the art. It will be a cherished addition to our lives. Anyone so inclined, please stop by and admire it.

Here's the breakdown for those considering buying art from another continent. Your miles may vary, but these were our shipping costs (in South African Rand):

Thanks Felix for making the rough and unforgiving process known colloquially as "being alive" quantitatively better. If we could do the same for John Kennedy Toole for having written A Confederacy of Dunces or for Brian Hutton directing Kelly's Heroes we would, but they're dead so you're it. We hope that repatriating your art is adequate compensation.

Lastly, in direct contradiction to the opening assertions about the beauty of instrumental vs. vocal music, would you consider collaborating with either Stephin Merritt or José González? Maybe you could do an electronica revision of Rodriguez' Cold Fact?

PS: We made a video of the unboxing of Felix Laband's art. The part where the face-hugging alien popped out of his chest was really fun. Here it is:

Posted by David Sanborn at 8:57 PM